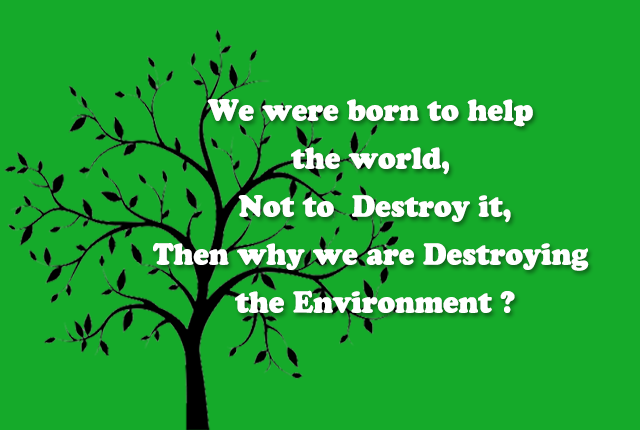 The heights India is trying to reach and the barriers it is facing are in a ratio of extreme gaps. In a way it can be said that the development is itself a combatant for environment today. Looking at the good side of the coin, India stands on 5th position in the list of economies. Successfully it has come up with a strong GDP growth rate of 7.2%. Not just this much, this figure is expected to increase up to 7.6 in the following year. This has been a global trend to put nature into danger whenever there is a need of development. Lesser do people realize that nature could not be left behind and has to walk side by side just like any other development process. Commonly we see that whenever an economy prospers, industrialization and use of resources rise. This makes it very clear that if one has to grow in the sense of industrialization and urbanization, environment has to be taken care enough to help in the supply of resources. A cash flow increase always witnesses the pace of urbanization in which India is no exception.

All the environmental issues like pollution, water scarcity and rising temperatures are evidence of the above statement. It has caught national attention, calling for immediate action to adopt a more sustainable economic model.

India is still witnessing droughts,extreme temperatures and rising pollution but only little results are seen. Our government has established some concerted measures to conserve both water and energy, little action has been taken so far.

Currently in India, there are more than 63.4 million people living without an access to clean water for drinking.

Reason for this could be uncontrolled abstraction of water for industrial and agricultural use. All of the above stated issues are something that is very crucial to lead a peaceful life. It should have been sorted till now. All the promises and ministries of environmental development are bent slightly towards failure. Hence it is now therefore imperative to focus on promoting recycling and reuse of water and wastewater treatment as part of the national agenda to create value.

The Government has taken efforts to promote the use of renewable energies. India has played a significant role in the formation of the International Solar Alliance (ISA). This implication is believed to be Prime Minister Narendra Modi’s brainchild. It has been established to harness solar energy to address the power deficits in the country. By 2022, India aims to generate 100 MW solar power. This would significantly reduce its dependence on coal and nuclear energies. India needs to work towards creating the necessary infrastructure for the implementation of these measures, which would require close collaboration between public and private sector entities. As the issues are dealt with each and every citizen of India, everyone has the responsibility to take initiatives towards betterment.

In order to bridge the gap between economy and environment, we must try to change our approach to validate these measures:

We all are aware that economic prosperity cannot be achieved at the cost of the environment safety. All the industries who are currently running are actually working with the attitude of “pollute first and clean later”. Whereas it is very crucial now to change this attitude and commit to preserve our diminishing natural resources. Circular economy  is one such step that promotes the reuse of resources and will bring in healthy practices of consumption of nonrenewable resources. A research has confirmed that this circular economic model could bring India annual benefits of Rs 40 lakh crore ($ 624 billion) by 2050 compared with the current linear model. The current model endows a benefit equivalent to 30 percent of India’s current GDP. However, to increase the annual benefits, we need to establish the need for industry-government collaborations to jointly prepare a roadmap to success. For some reason, India tends to lag behind its international counterparts when it comes to enforcement for environmental protection. Because of this there is an elongated need for severe actions and timely regulatory interventions as more often than before.

There is a need of common standard for environmental regulations and policies that must be devised and strictly implemented. A strict implementation will make all industries, irrespective of their size to make efforts to protect the environment.

India has been actively working towards advancements in technology. We already are working to access the best practices that are relevant with the current scenario.

With advancements in the field of technology, India has been working towards accessing best practices relevant in the current scenario. If we plan to have such developments, we must look to leapfrog generations of technology to gain scale. Initiatives like Make in India, Smart Manufacturing and Skill India are gaining momentum. The need to reassess our regulations and governance will help raise the baseline standards for all industries, even to the lowest common denominator.

The alignment of economic efforts along with the environment should not be restricted only to the government. Collaboration between the industry, government and regulatory bodies will help in evaluating decisions on economy and environment. For instance, being the authoritative body to safeguard the environment, the Ministry of Environment, Forest and Climate Change along the National Green Tribunal and industry can bring to steer a giant leap towards adopting sustainable economic models.

Making environmental safety an integral part of the national economic growth agenda of the country is the way forward for India. Integrating climate action into economic policies will only lead to greater output. According to the Organization for Economic Co-operation and Development (OECD), major economies could boost their long-term favourable economic growth prospects by 2.8 percent. Also the policies that lower greenhouse gas emissions, boost resilience to climate change impacts.

It’s not that government is taking less efforts. The Government has taken measures to curb environmental pollution. In line with the UN Sustainable Development Goals (SDGs) 2030, India has set its sustainability goals and solemnly pledged for a safer environment. However, action at the ground level is slow with delays in implementation.

Like they say, the planet belongs to all of us – human beings, animals, birds, plants, insects and others. It’s time to take interest in environmental issues and take actions on personal level. Let us reconnect with nature, and recommit to creating a cleaner, greener and healthier planet.